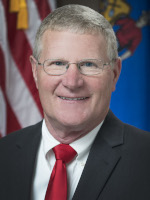 Senator Howard Marklein (R-Spring Green) has been appointed by Senate Majority Leader-elect Devin LeMahieu (R-Oostburg) as Senate Co-Chair of the Legislature’s powerful budget-writing Joint Finance Committee (JFC). The appointment will formally take effect in January when the new 2021-22 legislature is sworn in. Sen. Marklein replaces Sen. Alberta Darling (R-River Hills) who served as co-chair of the JFC since 2011.

Marklein has been in the legislature since 2011 and in the Senate since 2015. He is a Certified public accountant (CPA) and certified fraud examiner (CFE).