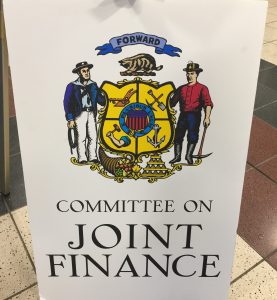 (Note: This is the first of three blog posts detailing information that was provided by the WASB Government Relations team to in-person attendees at the Legislative Update presentation during the State Education Convention last Friday.)

During our WASB Legislative Update webinar on January 12, the GR team said we hoped to be able to provide a progress report on negotiations between the DPI and the members of the Joint Finance Committee (JFC) aimed at reconciling differences over the distribution of a portion of the federal COVID relief funds for public schools (“ESSER III” funds) provided to the state under the American Rescue Plan Act (ARPA).

We have some good news report.  Last week, the DPI submitted a new plan to the Joint Finance Committee (JFC) for the distribution of about $114 million in federal (ESSER III) COVID relief funds that have been held up for many months.  The DPI’s latest proposal has been submitted to the Joint Finance Committee for and has been made public, which suggests that an agreement may be close. The JFC has 14 calendar days to either meet to approve or modify and approve the plan, or not meet, in which case the State Superintendent would implement the plan as submitted. The Committee has until Wednesday, February 2, 2022 to meet and act on this plan.

If approved by the JFC, the plan could result in essentially all school districts in the state receiving a minimum of at least $578/pupil in federal ESSER III funds, regardless of how much in-person instruction they provided during the 2020-21 school year.

Under the ARPA, state plans for distributing ESSER III funds are subject to U.S. Department of Education (USED) approval.  When Wisconsin submitted its state plan and it was reviewed, the USED found that the JFC’s directive under Motion 57 to explicitly exclude school districts that provided in-person instruction for less than 50 percent of their total instructional hours during the 2020-2021 school year from eligibility to receive funds violated the intent of the ARPA because it would prevent the students who lost the most in-person instructional time as a result of the pandemic from receiving these funds and much-needed services those funds would provide, and because it would also conflict with the ARP Act’s statutory requirement that the address the disproportionate impact of the coronavirus on certain student subgroups. That caused a portion of the state plan to have to be reworked.

The DPI’s Latest Plan
The DPI’s plan for distribution of the five percent earmark appears to be consistent with the intent of the ARP Act. It modifies the amount of ESSER III funding that would be distributed based on in-person instructional hours during the 2020-21 school year, and makes technical revisions to the timeline of activities and deliverables for the reading initiative included in Wisconsin’s ESSER III State Plan.

**We encourage school leaders to contact members of the Joint Finance Committee and ask them to support the modifications in the DPI’s plan.  This time has come to get this money out to our school districts.**

The ARPA directed that 90 percent of Wisconsin’s ESSER III allocation (or about $1.4 billion) be distributed to school districts and independent charter schools according to the 2020-21 Title I, Part A formula.  The remaining ESSER III funds not allocated according to the Title I formula were earmarked for specific purposes.

Wisconsin has a unique statute that requires the Legislature ‘s Joint Finance Committee (JFC) to review and approve of the DPI’s plan for distributing certain federal funds received by the department.  Under s. 115.295, Wis. Stats., the DPI must submit a plan to the JFC on how to spend additional federal dollars it receives whenever the additional funds received push the total amount of federal funds received by the department above 105 percent of the amount in the Chapter 20 appropriations schedule. The JFC then undertakes a 14-day passive review process of the department’s plan and can approve or modify the plan.

In the case of the ESSER III distribution, the DPI originally proposed using the 2.5 percent allocation to guarantee each district a minimum grant amount of $600,000 per district and proposed to allocate the 5 percent of funds earmarked for learning loss using a formula grant process designed to equalize per pupil awards across eligible districts.

The JFC scrapped both of those proposals and instead modified DPI’s plan such that the 153 LEAs with an initial ESSER III grant of less than $781 per pupil through the Title I formula used to distribute 90 percent of the funds would be eligible for a minimum grant of $781 per pupil if they provided in-person instruction for at least 50 percent of the 2020-21 school year using the same data collection methodology the JFC specified for determining the ESSER II set aside distribution.

That distribution was deemed by the USED to violate the ARPA requiring the 5 percent set aside funds to be used to address learning loss.