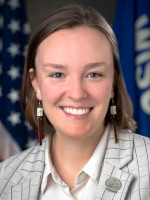 State Rep. Greta Neubauer (D-Racine) has been chosen by her Assembly Democratic colleagues to be the new Assembly Minority Leader. She succeeds Rep. Gordon Hintz (D-Oshkosh) who recently stepped down. Rep. Neubauer was first elected to the Assembly in a January 2018 special election and has been reelected since November 2018.

She was a member of the budget-writing Joint Finance Committee. See her full statement.

Read about how students at @FortSchools created a mural to honor the late poet Lorine Niedecker. fortatkinsononline.com/luther…

The deadline to apply to become superintendent of the Cochrane-Fountain City School District is just a week away, on May 20. Visit our Search Services page to find the vacancy notice, district brochure and essay questions: wasb.org/search-service… pic.twitter.com/ceHXvpohjP

Read about how @sdrrhinelander students are raising money to buy water filters for African communities. "It is even more important that they leave this experience realizing the power of being kind." wjfw.com/news/local/sch…

Our Spring Workshops, focused on improving school district governance, kick off tomorrow in Pewaukee. It's not too late to register for this or any workshop. Find the agenda and full schedule here: wasb.org/meeting-and-ev… pic.twitter.com/aybzb1e6yA

The WASB is assisting the Cochrane-Fountain City School District in its search for a new superintendent. The deadline is May 20. Visit our Search Services page to find the vacancy notice, district brochure and essay questions: wasb.org/search-service… pic.twitter.com/kQOqJB3doE

Some fun photos in this coverage of 360 students from @MilwaukeeMPS, Waterford and other nearby schools attending an environmental education event at American Family Field in Milwaukee. journaltimes.com/in-photos-an…

“Rural schools are starving for leadership.” Check out this great article from my @RoyallRocks friend, Mark Gruen. #schoolpr #suptchat twitter.com/WASBWI/status/…

Are you a Wisconsin school board member with questions about using social media or other online communications? It's not too late to sign up for our Thursday noon webinar. Learn more and register: wasb.org/meeting-and-ev… pic.twitter.com/Qs9bDqngxu

Read about how @MMSDschools students are learning to barber. "When they graduate, my vision is to have all the students walk across the stage, get their diploma, and I'll be right there at the end to give them their barber's license." captimes.com/news/education…

Thank you to those who attended last Thursday's online training for newly elected Wisconsin school board members. A recording of that training is here: vimeo.com/704616725

Teacher Appreciation Week is celebrated in the first full week of May. The day set aside to appreciate teachers is May 5. Learn more: nationaltoday.com/teacher-app…

"Teachers across Wisconsin are getting their largest raises in years allegedly because of the soaring inflation in the United States." gmtoday.com/news/state/inf…