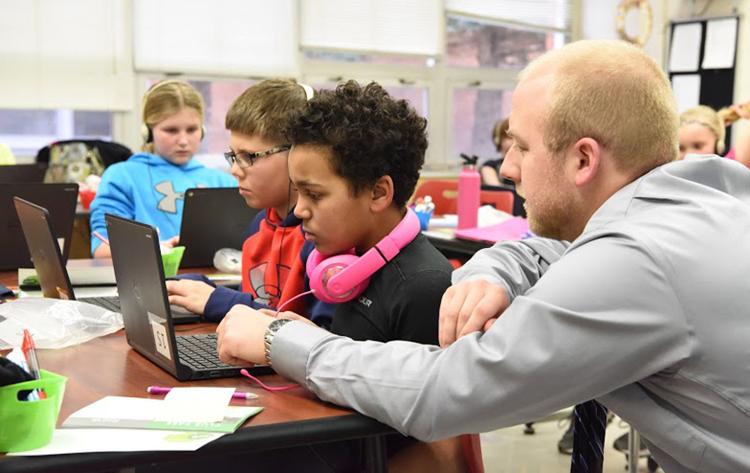 The Chippewa Herald: When Hillcrest Elementary teacher Marcie Lindbom asked her friends and family if they’d be interested in sponsoring a child from her fourth-grade class by donating money for books, she didn’t expect a flood of interest.

But that’s what Lindbom got – and more.

Last week, she posted on Facebook asking people to consider donating $9 for a child in her class to receive one free book per month for the entire school year.

“Within a couple hours, I had my whole classroom sponsored, with extra,” Lindbom said.

Other Hillcrest teachers were surprised by the overflow of generosity, and ran with the idea, Hillcrest principal Leslie Lancette said.

“At Hillcrest, five of my teachers that I have seen that are doing it,” Lancette said.

It’s an idea that is delighting teachers across Wisconsin. Lancette and Lindbom say the trend has taken over their friendly social media network of teachers, from Rib Lake to Stevens Point to the eastern side of the state.

The Dunn County News: In a collaboration, Dunn Energy Cooperative, Water Source Heating and Cooling of Eau Claire, and the School District of the Menomonie Area have successfully completed a project insuring renewable energy for years to come for the district.

Through a grant from the Dunn Energy Cooperative’s Operation Round Up program and the resources of Jesse Green from Water Source Heating and Cooling, the Bjornson Education-Recreation Center — known locally as the Environmental Site — has installed a 3kW photovoltaic array.

This, along with the School District’s participation in the Dunn Energy SunDEC Community Solar array, brings the Environmental Site to a 100 percent renewable status.

“The success of this solar project is a great example of the good that can happen when community partners come together,” said Joe Zydowsky, district administrator for the School District of the Menomonie Area. “We are proud to say that the school district’s environmental site is now 100 percent powered by renewable energy. Not only has this been a wise investment for the School District of the Menomonie Area, but it also has the potential to serve as a good example and learning opportunity for our students and staff.”

Leader-Telegram: Some middle-schoolers couldn’t care less about spelling. Others, such as one Thorp student, travel the country to prove they’re good at it.

He did not progress to the competition’s finals today because to do so required at least 28 points on a written spelling and vocabulary test all participants took in the first round of nationals.

Tyler Nelson, Thorp Middle School’s principal, said he was proud of Ryan for how far he made it in the competition. Ryan can serve as an inspiration for younger students in the district, he said.

“It just goes to show that hard work can pay off and the sky’s the limit for what our students can accomplish,” Nelson said.

At the national level, Ryan had to face off against 514 other spellers from across the country, including seven from Wisconsin. None of the students from Wisconsin advanced to the finals.

This is Ryan’s first time making it to the nationals, but Nelson said the student competed at the state level a few times.

Augusta students give back for Hugs for Humanity

WEAU.com: The Augusta Area School District participated in the 2nd Annual Hugs for Humanity. School leaders said 600 students from Pre-K to 12th grade took part in a variety of events including, making birthday boxes for an area food pantry, cleaning, raking, and picking up trash at local businesses.

They said the event is busy, but fun day for everyone.

“Kids are doing it throughout the day, some kids participated in the morning and some this afternoon,” said Augusta Elementary School Principal Nicole Steinmetz. “We got buses coming and going to help transport us downtown into the highways to help clean-up.”

Read the complete article on the Augusta School District’s work.

WSAW.com: Students and staff from the Medford School District are the driving force behind a bill that pushed for job opportunities for people with disabilities. Governor Walker signed Assembly Bill (AB) 625 also known as the Employment First Bill into law Wednesday in the presence of the students.

In January, students and staff from Medford testified in Madison about their experiences working in their community through the school district’s SOAR program.

“Many individuals with disabilities want nothing more than to work at a job out in the community,” stated Representative James Edming.

The Employment First movement is the promotion of policies that encourage competitive integrated employment. CIE is the employment of individuals with disabilities in a workplace in the community working alongside people without a disability.

Read the complete article on the bill signing.