Reedsburg Times-Press: Sixteen-year-old Kassidy Kleeber said as the next generation of people in this world an example needs to be set when it comes to preventing substance abuse within communities. This is a reason why her and another student, Forrest Eden, are taking action to help educate others about substance abuse.

“It’s kind of up to us on how we’re going to show the younger ones what we need to be doing and how we can keep ourselves healthy,” she said.

Both teens are a part of the newly formed Sauk County Partnership for Prevention and Recovery Coalition, a group formed last November to help identify local issues on substance abuse and how to solve them. Tamara Eden, an adult advisor for the youth with the coalition and alcohol and drug abuse specialist, said meetings are open to anyone. The group meets from 1 p.m. to 3 p.m. on the fourth Thursday of the month in the basement of the Sauk County Courthouse at West Square Building, 505 Broadway Baraboo, in room B24.

Kleeber and Forrest Eden were selected to represent the coalition at the Community Anti-Drug Coalitions of America Mid-Year Training Institute July 15-19 in Orlando, Florida. At the conference, both teens learned through different training sessions about substance abuse around the nation as well as prevention techniques. It was through those sessions, as well as smaller group sessions, they learned to identify issues regarding substance abuse among youth in Reedsburg, especially with heroin use and underage drinking.

“We started to realize the problem in our community was getting out of hand,” Forrest Eden, 15, said.

District Administrator of Horicon Schools Rich Appel said, “A healthy and happy staff is a more productive staff and will live longer and healthier.”

To earn this designation, Horicon staff formed a wellness committee and chose to implement evidence-based best practices such as enhancing the physical environment and forming a wellness leadership team to improve well-being for employees. For example, research shows that fewer than 50 percent of Americans find meaning at work.

Worksite environment can have a significant impact on well-being. At least half of the available items in the onsite vending machines fall within the USDA Smart Snacks standards.

Bicycle racks are available for both student and staff use, and showers are available at the schools. Staff are provided with desk stretches and can schedule micro breaks on their calendars to remind them to get up and move if they spend long periods of time in front of a computer and sitting.

Read the complete article on the Horicon School District.

Daily Citizen: Van Brunt Elementary in Horicon has been recognized as the newest Blue Zones Project Approved school in Dodge County. This designation reflects the school’s commitment and focus on not only building a stronger and healthier community, but also making well-being a priority for young learners to prepare them for a lifetime of better health.

“The Blue Zones Project initiative at Van Brunt is changing the culture of our school in a variety of positive ways. We are bringing awareness to healthy choices for our students including being active, eating right and being mindful,” Assistant Principal Cynthia Borgstorm said.

Van Brunt Elementary enhanced the school environment by removing unhealthy advertising and vending machines. They also incorporated Go Noodle brain breaks into classroom time. Students made their own homemade pizza through a Kids in the Kitchen class, providing an opportunity to gain a hands-on understanding of food. Meanwhile, parents were given ideas of non-food alternatives, activities and other recognition for classroom birthday celebrations.

In addition, the school wellness team chose to make this the year to incorporate a school fun run as a school fundraiser. The fundraiser was a huge success, creating a positive and healthy way to move naturally for students.

Lodi Kindergarteners to be ‘Nurtured in Nature’

Lodi Enterprise:  The Lodi School Board approved Nurtured in Nature, a learning initiative that encourages kindergarteners to play, be outside and just be kids at its regular meeting Sept. 11.

Kids are under greater pressure to achieve high standards, and most are so overscheduled they don’t have time to simply be children, Lodi Elementary Guidance Counselor Val Bilkey said. Bilkey introduced the unanimously-approved program to the board via PowerPoint presentation.

Research also shows that young children who engage in some form of unstructured play have better language and social skills, the ability to empathize with their peers and achieve higher levels of thinking, she said during her presentation. Being out in nature reaps many benefits of their own, she said, including reduced anxiety and improved cognition.

“We are already noticing a difference in our students when they are engaged in free play versus when they are in a classroom setting or even outside at recess,” Bilkey wrote in an email. “They communicate, problem-solve, work together and are better able to naturally self-regulate.” 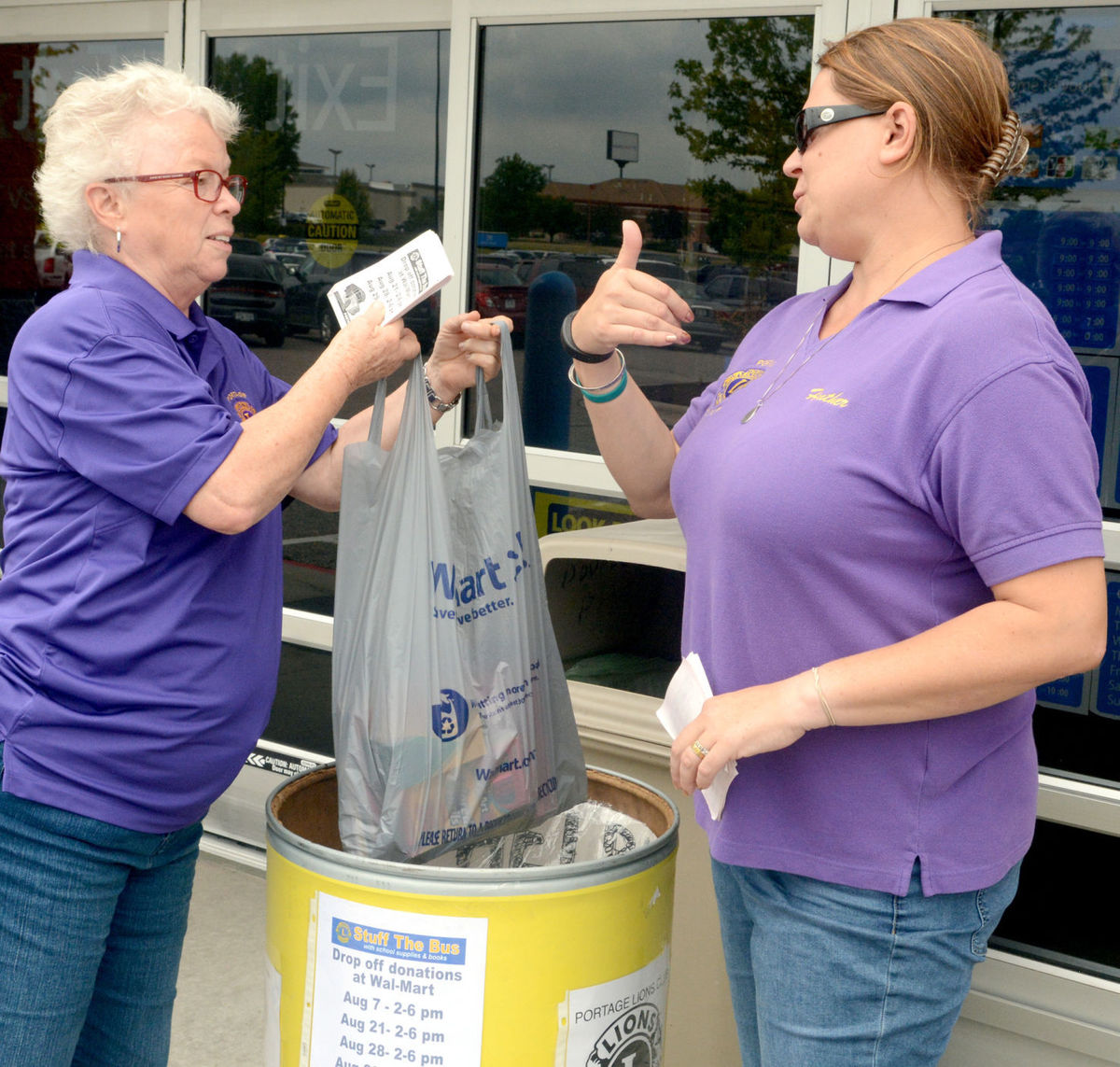 Portage Daily Register: Whoever might need a reminder of the fast-approaching school year need only go to the front entrance of Walmart Thursday evenings to see those familiar purple shirts and the big, yellow bin.

“I think it’s also a reminder that some families can’t afford to buy their own school supplies,” Nancy Schaper said, this while acknowledging summer has once again gone by too fast.

“If you ask for something (in Portage), somebody is willing to give it or do it,” Schaper said. “We know that with Stuff the Bus, we’re very lucky for the people we have in Portage who are willing to go out of their way to support (drives).”