Point of Convergence also earned ASPA’s 2017 First Place with Special Merit award. The publication was recognized with ASPA first-place awards in 2015 and 2016 as well. Also in 2016, Point of Convergence earned an award from the National Council of Teachers of English.

Point of Convergence features poetry, fiction and nonfiction writing, and the cover is selected from student photography or artwork. It is an authentic start-to-finish publication opportunity for D.C. Everest students. They write, read, edit, design, market and sell the publication.

Wisconsin State Journal: True Vue grew up speaking two languages: Hmong at home and English at school. After arriving in Wisconsin from Thailand at 1 year old, however, she had no one to teach her how to read and write in her native language.

That she had to do for herself. The child who was born in a refugee camp taught herself the Hmong written language by concentrating intently on hymns as they were sang at weekly services.

Hmong students at Locust Lane Elementary School won’t have to resort to those self-teaching methods today.

Early last month, Vue, her sister Tia Lor and English language teacher Karla Lien started a language club at the elementary school geared toward fourth- and fifth-grade students who speak at least some Hmong at home but do not know how to read or write the language. The club’s creation preceded the Eau Claire school district’s announcement last week that it will include a “Hmong History and Culture” course at the high school level next fall.

NBC26.com: The longest running school newspaper in the country is in Pulaski. Future journalists gather in one classroom to learn the basics.

“We get to share our writing with the entire community,” said Senior Jaclyn Willems.

The Pulaski News newspaper is run by the school but is available to the entire community. Instructor Emily Alger-Feser, a Pulaski High School alum, said it’s great to be back.

“Pulaski is built up of pride and tradition, that’s two words we use a lot. Now being able to help them, this is an awesome group of people. It just kind of feels great to be back here again and doing something not just for the school and district, but for the whole community.”

Read the complete article on the Pulaski student newspaper.

Madison.com: There are no plastic trays, pans of lasagna, a salad bar or even crates filled with cartons of chocolate milk.

Most days, students in the Washington Island School District are on their own for lunch. If they want something hot, they bring a Thermos or use one of the eight microwave ovens in the school’s multipurpose room to heat up leftovers or other concoctions from home.

The closest the school comes to a lunch program is once every other Wednesday. That’s when the student council, as a fundraiser, makes a $4 meal that can include homemade spaghetti, pizza or hot dogs.

“It’s a big hit with the parents because that’s the one day they don’t have to put a brown bag together,” Superintendent Mati Palm-Leis said of the Student Council lunches. “One of the things that’s important to me is that we emulate a school experience that’s similar to other schools.”

But with just 72 students, virtually no funding from the state and its isolated location off the tip of the Door County Peninsula, the state’s smallest prekindergarten through 12th grade district is unlike any other in Wisconsin.

The district, with only one regular school bus and an annual budget of $1.5 million, still faces the same challenges as others around the state. The issues include teacher recruitment, health insurance and transportation costs, taxes, funding special-education programs, finding substitute teachers and convincing residents to run for the School Board.

Read the complete article on the Washington Island School District. 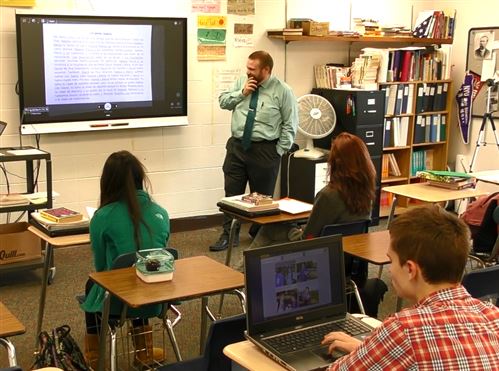 Oh, and they’re surrounded by one other thing — water.

“Being on an island, you can definitely say we’re a very close-knit community,” teacher/​athletics director Michael Gillespie said. “When we say ‘everybody knows everybody,’ that’s definitely true here.”

The island and its roughly 700 residents are located about six miles northeast of the Door County peninsula mainland. All students and school employees live on the island, which connects with the mainland via the year-round Washington Island Ferry Line service.

The island town was established in 1850, and one of the town board’s first acts was to establish a log school near Washington Harbor (now Schoolhouse Beach). The 35-square-mile island later maintained four schools simultaneously until they were consolidated into one school about six decades ago. The current school building, which opened in 1986, houses all grades under one roof — with separate wings for a high school, middle school and elementary school.