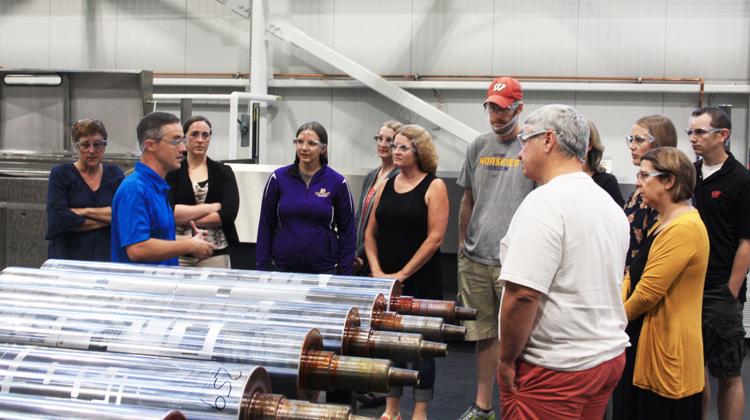 DeForest Times-Tribune: Employers want many things in their workers – productivity, positivity, and reliability as a short list.

For American Packaging Corporation in DeForest, “personal accountability” is a major sticking point. It’s the difference between suffering from a large turnover rate versus a workforce that commits to a company and rises up through the ranks. Company representatives said there is significant management investment to recruit and retain workers that display promising qualities.

“We’re not hiring to keep people at the bottom level,” said Facility Manager Josh Voelker. “That’s not our plan.”

But even with state-of-the-art equipment and an assortment of internal policies to promote advancement of workers, policies including tuition reimbursement and in-house certifications, the Philadelphia-based company reports that it’s struggling to fill vacant, local positions.

Now, the DeForest Area School District is showing interest and recently sent 11 teachers on a tour of the factory. Located in DeForest’s northern industrial park, the teachers visited the American Packaging plant Aug. 9 and heard from company representatives. Topics of discussion included workforce development and the types of skills needed to start working right out of high school.

Wisconsin State Journal: Madison school officials say a nine-week “micro school” at the end of the 2017-18 academic year improved attendance, engagement and learning for a small group of at-risk La Follette High School students, but key questions remain about how the model could be implemented in the future.

The Madison School District launched the school April 5 at the Life Center Madison church in the wake of a string of fights and other behavior problems at La Follette, on the city’s East Side. The idea was to try to re-engage a small group of students believed to be responsible for much of the discord, in part by allowing them to have a greater say in what they learn and how they learn it.

Enrollment in the school was voluntary and while the district initially sought to recruit from 15 to 20 students, ultimately 13 — all black or biracial boys — signed up, and 10 of them showed academic, social and other kinds of progress toward graduation.

According to a July 9 report on the program:

The majority of the students also gave the school high marks.

DPI: Two schools in the Oregon School District were recognized in May by the U.S. Department of Education as Green Ribbon Schools, an award given for reducing environmental impact, improving health and wellness of staff and students, and increasing environmental literacy. The only Wisconsin school district to have all of its schools recognized by the top three awards for health in the state: Driven to Better Health, Alliance for the Healthier Generation, and the Wisconsin School Health Award, it is no surprise Brooklyn Elementary School and Oregon Middle School were bestowed this honor.

At this small school in rural Dane County, the school garden serves as a cornerstone of Brooklyn Elementary School’s culture. Filled with lettuce, kale, tomatoes, cucumbers, marigolds and more, the garden has become so much more than a class project, allowing all students to experience hands-on learning while improving their knowledge of health and wellness.

For the past fifteen years, Oregon Middle School has been implementing their green and healthy initiatives for which they have received numerous awards, recognitions, and grants. Growing and eating food from their own gardens is important for OMS. The school has a greenhouse and a hoop house to involve students in the process of growing the food that supplies their cafeteria with fresh produce about ten months of the year.

Cambridge News & Deerfield Independent: A large new garden is rising at the edge of a woods at Cambridge Elementary School. It will be a place to play with science, eat new things and dig in the dirt, say those who have worked for more than a year to get it built.

A lot of Cambridge-area adults and kids have had – and will continue to have — a hand in its creation and inaugural season.

Inside the Blue Jay Garden’s picket fence, that will be painted next fall under the direction of CES art teacher Sarah Krajewski, 15 raised wooden beds are starting to fill with herbs and vegetables planted by students. The responsibility of caring for all that will shift in June as local day camp groups take over watering, weeding and picking. In the fall, students will finish the harvesting.

This week and last, CES students were setting early season plants under the watchful eye of Georgia Gomez-Ibanez, a longtime volunteer who coordinates the school’s environmental education program and who sits on its garden committee.

Unlike a prior garden at the back of the school that’s now abandoned, the new garden is in the thick of student activity. Principal Chris Holt said it’s intentionally steps from two playground areas and the school forest.

The old garden “felt hidden,” said Ben Timp, co-chair of Cambridge Farm to School and also a member of the garden committee.

The new garden’s back gate opens to the school forest trailhead, a shady space with benches and picnic tables for teachers to use as an outdoor classroom. Also steps away is a new prairie garden being relocated from elsewhere on the school grounds, and not far away is a pond where frogs are awakening in spring chorus.

Watertown Daily Times: STEM continues to be at the forefront of learning in the Watertown Unified School District, but this time it was students doing the teaching.

She had the idea after volunteering at a lock-in that took place at Douglas Elementary School.

“I thought it would be fun to do something similar but educational,” she said.

Schildbach came up with the concept and the plan for the afternoon to teach students some STEM concepts, mostly focusing on chemistry.

“There are a lot of cool experiments that go along with chemistry,” she said.

Schildbach put a lot of work into the event and she said she received an A for the assignment.

“I had to learn everything I was going to teach them and figure out how they would respond to it.”

Seventeen students signed up for the event.

Her goal was simple, “To have a lot of fun and teach as much as I can.”