Rounding out the committee for the Senate GOP: END_OF_DOCUMENT_TOKEN_TO_BE_REPLACED 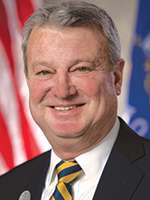 Speaker Robin Vos (R-Rochester) has announced the membership of the Assembly standing committees for the 2023-24 legislative session that begins with the inauguration of members on January 3, 2023.

State Representative Joel Kitchens (R-Sturgeon Bay, pictured) has been announced as Chair of the Assembly Committee on Education. Before being elected to the state legislature, Rep. Kitchens was a member of the Sturgeon Bay school board.

Rounding out the committee for the Assembly GOP: END_OF_DOCUMENT_TOKEN_TO_BE_REPLACED

END_OF_DOCUMENT_TOKEN_TO_BE_REPLACED

A former teacher, Darling, 78, was a long-time member of the Senate Education Committee and chaired the committee for the past two years.  She previously serving as the vice-chair of the committee in the 2015-16, 2017-18 and 2019-20 sessions.  She also served as a member of the Blue Ribbon Commission on School Funding.  Her departure means a new chairperson will take over the Senate Education Committee.
END_OF_DOCUMENT_TOKEN_TO_BE_REPLACED

The takeaway is that there should be plenty of money available in state coffers to both increase public school funding and cut state taxes, which could satisfy both Governor Evers’ goals and the goals of some legislative leaders, particularly leaders in the state Senate. END_OF_DOCUMENT_TOKEN_TO_BE_REPLACED